“Your will to succeed remains one of your greatest assets.” 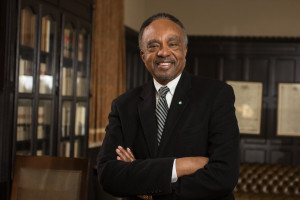 According to Clifton L. Taulbert, noted author and entrepreneur businessman, he could have failed had he not encountered community builders and entrepreneurial thinkers early on in his life. Taulbert was born on the Mississippi Delta during the era of legal segregation where he completed his secondary education. Though opportunities were few and barriers were plentiful, Taulbert managed to dream of being successful, not knowing the shape that success would take. Today Taulbert is the President and CEO of the Freemount Corporation (a human capital development company) serving clients nationally and internationally-Fortune 500 Companies, small businesses, federal agencies, professional organizations, community colleges and K-12 leadership. Additionally, entrepreneur Taulbert is the President and CEO of Roots Java Coffee-an African-American owned national coffee brand, importing coffee from Africa. To pass his life lessons along, Taulbert shares his entrepreneurial journey with others as a Thrive15.com mentor.

Beyond the Mississippi Delta

Following high school graduation and a short banking career in Saint Louis, Taulbert enlisted in the United States Air force. After successfully serving in the 89th Presidential Wing of the United States Air Force in the late 1960s, Taulbert was honorably discharged and continued his college education, graduating from Oral Roberts University and the Southwest Graduate School of Banking at Southern Methodist University. During those years, Taulbert was quietly writing. His first book Once Upon A Time When We Were Colored became a national best seller, a major motion picture and a requested gift for Nelson Mandela upon his release from prison. Eight Habits of the Heart, one of Taulbert’s thirteen books garnered him an invitation by former Supreme Court Justice, Sandra day O’Connor to address members of the court and their invited guests. Taulbert’s literary work ignited the journey that has taken him throughout the world. As a recognized thought leader on the issues of community, Taulbert has lectured at Harvard University Principals Center and the United States Air Force Academy. Taulbert also serves as a knowledge source content provider to Korn Ferry International.

Taulbert was chosen by CNN at the turn of the millennium to be one of the voices of community. He has also been inducted into the United States Enlisted Airmen Hall of Fame and inducted into SMEI Academy of Achievement: The Free Enterprise System. Taulbert has been honored as the National Jewish Humanitarian of the Year & Arthritis Foundation Volunteer of the Year and recognized by the NAACP 27th Annual Image Award for contribution to literature. The Last Train North, his second book was nominated for the Pulitzer Prize. He was the first African-American to win the Mississippi Institute of Arts and Letters Award for Non-Fiction.

“In the community I remember, write and talk about, we valued each other and shared our lives.” – Clifton L. Taulbert

Taulbert celebrates life with his family—his wife Barbara and their adult son, Marshall Danzy Taulbert, an aspiring actor and writer.